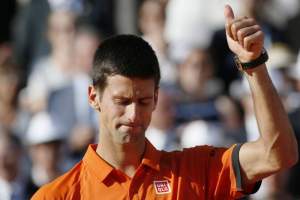 The Golden Oldies show no sign of slowing down

Not the usual suspects that get spoken of all the time, but the veterans that rarely get a mention. Two former Roland Garros champs put on one of the matches of the tournament; Francesca Schiavone’s defeat of Svetlana Kuznetsova in the second round had the fans out of their seats on so many occasions. Errors were scarce as each point turned into a mini-classic. Eventually it was the 2010 champion who overcame her 2009 counterpart, just as she had done in the 2011 Australian Open in their 4hour 45 minutes record-breaking encounter. It’s worth noting that this was Schiavone’s 59th consecutive Grand Slam, an absolutely incredible achievement which is great testament to the way the Italian, who turns 35 in a fortnight, has looked after her body over the years. In addition, the titles were won by champions who are both in their fourth decade. On top of all of this, you have the likes of Ana Ivanovic, Lucie Safarova and Jo-Wilfried Tsonga who are playing as well as, if not better, than at any other time in their careers.

The golden age of Nadal, Djokovic and Federer all at their peaks is history. Will Federer win another major? Possibly, though you would say that his best chance will come within the next five weeks. Will Nadal will another French Open? Probably. Will Novak Djokovic win more majors? Certainly. But the days of only this triumvirate sharing out the majors are gone for good. Djokovic is deservedly the best in the world right now, his consistency is second to none and if there’s any justice he will win that elusive French Open title – more on that to follow. Andy Murray believes he is back to playing his best tennis and ready to win more majors. His improved clay court performance points to brighter things beyond the 2015 Parisian horizon; he is well-placed to mount serious challenges for that title in the next couple of years and will be one of the two favourites going into the London summer later this month. As much as Djokovic is the most consistent and consistently best player in the world right now, Stanislas Wawrinka’s best tennis is better than anybody else’s best tennis. The way his backhand stood up to scrutiny and pressure during the final on Sunday was immense. His big shot won him a second Grand Slam, and you cannot rule out further titles for the Swiss. Much like Petra Kvitova on the women’s side, when Stan is hot nobody can touch him.

The future’s looking bright too

I believe that tennis is in rude health at this moment in time. The changing of the guard is not so much a dramatic process in the men’s game, rather an evolutionary one. And whilst Serena Williams remains the dominant force on the women’s side, there is plenty of healthy competition underneath her.  As well as the aforementioned ‘veterans’, of which runner-up Lucie Safarova deserves special mention for her magnificent run this past fortnight and her refusal to go away in the final, the new guard are all jockeying for position. You would have got big money if you had predicted that Sloane Stephens, Andrea Mitu, Elina Svitlolina and Alison van Uytvanck would all reach the Last 16 in Paris, but that they did. Stephens had eventual champion Serena on the ropes at 6-1 5-5 before slipping to a three-set defeat and Svitolina hinted at great sporadic things in her future by reaching the quarter-finals. Van Uytvanck is the wild card here; her flat-hitting may see her become a part of the establishment for years to come if she can hit so hard and consistently over the coming years. Of course it’s always a big if when a new name comes through but she definitely has the power to play a big part. On the men’s side, the likes of Jack Sock and Borna Coric are starting to win matches at Grand Slam level, which will hopefully be the next step in their transition into big deals. Sock in particular has done ever so well to overcome years of niggling injuries and it was great to see his name still in the draw as the event entered its second week. With Milos Raonic missing through injury but starting to regularly reach quarters and Kei Nishikori getting closer on a more-regular basis, the men’s game has enough depth to suggest competitive Slams lie ahead of us. The next few years promises to showcase some classic struggles as the likes of Nadal, Federer and eventually Djokovic go out fighting against the best of the rest.

Belgium’s next big thing? Van Uytvanck can be proud of her ten days’ work

Novak Djokovic must have thought his French Open time had come when he swatted aside the challenge of nine-time champion Rafael Nadal in the quarter-finals and the ovation he received after losing his third final will live with him for a long time. It went on and on and on and the Serb did well to hold off his tears – so after all this time, like so often with tennis, the way you get people to like you more is by losing. Tennis fans love the guys who are chasing their own personal holy grail; Borg with Roland Garros and Goran Ivanisevic and Jana Novotna in their pursuit of a Wimbledon crown are the three that spring straight to mind. Unfortunately for Djokovic, you sense that he himself feels his career will be defined by his Roland Garros pursuit now; win it, complete the career Grand Slam and forever be immortalised but fail to do so and forever be remembered as the guy that chased the dream which was always just out of his grasp. As good as Wawrinka was in the final, you did get an overriding sense that the undisputed best player in the world felt the weight of history that was on his shoulders was just too much. I really hope for his sake that he can channel his excitement and eagerness to make history in the coming years or the career Grand Slam he deserves will pass him by.