I wrote 15 days ago about how I had a feeling that Wimbledon was going to be a stellar tournament and I have to say that for me it delivered. At the end of the fortnight, Serena Williams was the holder of her 21st Grand Slam title and Novak Djokovic was holding his eight major aloft. But on the way to these fairly predictable outcomes, we were privileged to see scintillating encounters as well as near-exhibition tennis from some of the all-time greats. Moreover, a former champ returned to the winners’ circle and the tournament played out in virtually-perfect summer weather. Yeah, 2015 was a vintage Wimbledon.

Nine majors and counting for the great Djokovic

Novak Djokovic is a machine. He’s now gone onto nine major wins, putting him ahead of Jimmy Connors, Fred Perry, Ken Rosewall, Ivan Lendl and Andre Agassi. I don’t think any of those players, especially the Open era champions, get less respect and recognition than Djokovic does. I said in January how when you watch Djokovic in the flesh up against the very best you truly appreciate just how far he has come since his early days in the sport. He was always a very good player, but what he does on a tennis court now is the stuff of legend. I have never seen such a great counter-attacker on a tennis court, hitting so accurately and so deeply on such a consistent basis. But that accurate, deep hitting allows him to set the pace in these big matches; it was Federer doing the scampering around at many stages in that final. Add to this Djokovic’s ridiculously low number of unforced errors in such a big match then you are now looking at a truly flawless tennis great; there is no weakness there.

Across from Djokovic on the champions’ dinner dancefloor was Serena Williams, celebrating her sixth Wimbledon title and 21st major in total. The elder Williams is now 75% of the way to completing the elusive calendar Grand Slam and only a fool will bet against her achieving that in New York in eight weeks’ time. Serena is now only three majors behind Margaret Court and it seems a foregone conclusion that she will now at least equal that mighty haul of 24. She came within a couple of points of being dumped out in the third round by Heather Watson, but that is where Serena’s grit shines through. Yes, she is the most powerful player to ever play the women’s game and her serve is the greatest it will ever see but it is the incredible fight that she can possess that has seen that number rise so high. Wanna play Pontoon? Monica Seles, Maria Sharapova and Venus Williams- their total major championships come to 21, the same number as Serena has won on her own.

21 not out – the incomparable Serena Williams

As examine the tournament, we see great examples of depth in both draws. Who would have backed Richard Gasquet to calmly see off reigning French Open champion Stan Wawrinka 11-9 in the fifth set? John Isner seemed to shy away from going for his own Wimbledon record when he bowed out on the second day of his five-set marathon with Marin Cilic. Vasek Pospisil leaped out of the Canadian shadow of Milos Raonic and Eugenie Bouchard, who had disappointing and dreadful championships respectively, by reaching his first major quarter-final.  Roger Federer advanced defiantly into a second consecutive final and would surely have lifted an eight Wimbledon title if Kevin Anderson had have taken care of the eventual champion when he led him two sets to love last Monday evening. Federer was imperious against Gilles Simon and Andy Murray leading into that final and will be cursing his luck that he came up against the flawless Djokovic once more.

On the women’s side, there were stand-out runs to the latter stages for CoCo Vandeweghe  and Garbine Muguruza. The former showed no fear as she went toe-to-toe with Maria Sharapova in the quarter-finals, pushing the five-time major winner every step of the way. It will be interesting to see if Vandeweghe pushes on from here. Muguruza had an amazing run to her first Slam final, taking out the likes of Caroline Wozniacki, Angelique Kerber, Timea Bacsinszky and Agnieszka Radwanska and then doing herself proud by putting in a decent performance against Williams in that final. Her powerful groundstrokes and wingspan remind me of a young Venus Williams and she would do well to go back to Barcelona and purchase a grass court to ensure her performance here isn’t a one-off. Her results at all the slams now are showing signs of consistency and she seems to be the youngster who is most capable of being a regular feature in the world’s top five.

Muguruza, look at you. The Venezuelan-born Spaniard broke through bigtime

When Martina Hingis came back to the tennis world following a drugs ban, there were few that didn’t queue up to offer her their partnership. The chosen ones were Indian duo Sania Mirza and Leander Paes and Hingis is surely close to being the best doubles player in the world right now. She waited 18 years for another Wimbledon title, and much like London buses, two came along at the same time. It’s good to have Hingis back and so much a part of the scene, but it’s to her eternal shame that her career will forever be asterisked with a 2-year drugs ban. Having said that, it’s still good to see that smile back on a doubles court and one wonders how she’d fare if she decided to make a second singles comeback, even at the age of 34.

It wasn’t all great over the past fortnight. Caroline Wozniacki rightly opened up the debate about Wimbledon’s scheduling of the two main show courts. Their late starts (starting 90 minutes after outside courts) mean that there is only time for three matches per day on those two courts, and 99% of the time that means two men’s matches and only one women’s match each day. By also starting at 11.30am, it would give greater exposure to the top of the women’s game. (Come on) Tim Henman has promised that he and the rest of the Wimbledon Committee will look into this and Henman has been a force for good since he started in that role five years ago so expect to see change in the next year or two. Not before time. 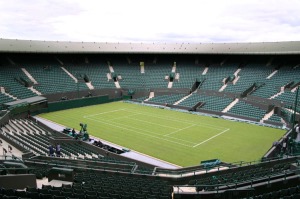 All in all, the British summer time sun shone brightly on a magnificent tournament. More and more players in the modern day seem to be acclimatising to playing on grass and the extra week’s rest between Roland Garros and Wimbledon ensured they had enough time to adapt to the different surface, ensuring a Wimbledon that will live long in the memory, especially for two of the greatest champions that have ever graced the sport. Roll on New York City!