Djokovic must seize his best opportunity yet – French Open 2016 preview

The arguments that Novak Djokovic is the best tennis player to have ever lived get louder and more numerous with each passing year. His place in history is safe but only by lifting the Roland Garros crown will he feel that he’s achieved all that he is capable of. Last year showed signs that the obsession was crippling him, it all getting too much for him once again in a final. Does 2016 provide him with an ever greater opportunity than last year did?

The World Number 1 made a massive breakthrough in Paris last year when he ousted 9-time champion Rafael Nadal in straight sets, as much a mental breakthrough as anything else. Nadal is no longer impregnable at Roland Garros and this will give everybody a boost. Look what happened when Roger Federer’s invincibility started to ebb away; Sergiy Stakhovsky is what happened. Djokovic must take every match as it comes (something at which he is usually so adept) and there is little doubt that he will appear in the final in a fortnight’s time. Who is he likely to face? 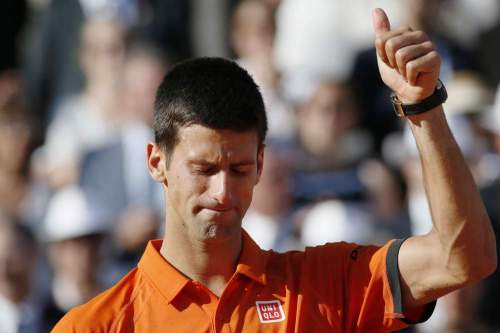 Most neutrals will be cheering Djokovic on

The usual suspects will line up, minus one noticeable absentee. This will be the first Grand Slam in 66 that Roger Federer has failed to take his place in. Let’s just be clear about the enormity of that – this is the first tennis major that the Swiss has not appeared at THIS MILLENNIUM! The 17-time major winner has opted to give this one a miss in order to allow his back to fully recover, seemingly with one eye on giving Wimbledon a sizeable tilt at the end of June. His absence means genuine contenders are few and far between. The obvious two candidates are Rafael Nadal and Andy Murray. The latter has been in the finest clay court form of his career recently, competing at a high level with both Nadal and Djokovic each time he has met one. His recent victory over Djokovic in the Rome final will have given him a gigantic psychological lift, ending that horrendous losing streak he had been enduring at the hands of the Serb; Murray looks set for a first French Open final. If he slips up, Nadal is sure to take advantage but it is hard to see the Mallorcan finding a way through both the Scot and Djokovic. The winner will certainly come from those three and the smart money is on Djokovic cementing his place in tennis history by completing the career Grand Slam and taking him clear of Bjorn Borg and Rod Laver to achieve his 12th major title.

On the women’s side, it is practically impossible to see beyond reigning champion Serena Williams. Her previous closest competitor Maria Sharapova will not be there to seek out her third French Open title and we currently do not know when, or indeed if, we will ever see her on court again after her failed drugs test. As ever, it will take a monumental effort from somebody to topple the 21-time major winner, but recent defeats in the latter stages of Grand Slams will give hope to the field. In the past, once Serena had played her way into a tournament that tended to be it – but she has lost at the semi and final stage of the last two major tournaments and the likes of Simona Halep, Angelique Kerber and even Svetlana Kuznetsova will fancy their chances if they can hit some kind of form in the French capital. Of course, Victoria Azarenka cannot be ruled out from completing her comeback by returning to the winners’ circle and Gabby Muguruza will look to defend her points from her fine Spring of 2015 by matching or bettering her results this time around. Nevertheless, the smart money will be on the younger Williams sister drawing level with Steffi Graf on 22 major titles, as long as she doesn’t get too tempted by the dog food on offer in Paris’ finest brasseries as she did recently in Rome. As for me, I’m off to the first three days so will check in with my experiences sometime next week. Here’s hoping it doesn’t take me an hour to get a coffee this time!