Plenty of early Brexits, but Serena and Djokovic Remain the ones to beat 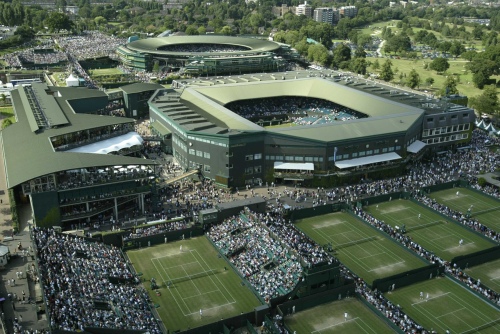 There’s a strong temptation these days to just hand the Wimbledon trophies over to Serena Williams and Novak Djokovic and not bother playing the tournament at all. But with Andy Murray reuniting with Ivan Lendl and Serena not having won a major since this time a year ago, what hope is there for a different name on those trophies in two weeks’ time?

Serena Williams should not have too many issues until next weekend, when she is set for a Centre Court showdown with either Heather Watson, who came so close to defeating her on that very court at the same stage last year or, more probably, with Kiki Mladenovic who pushed her close in Paris last month. If Serena were to come through that potential banana skin, she could race away to her 22nd Grand Slam but I just have a gut feeling that Mladenovic may get the better of her in a big shock. 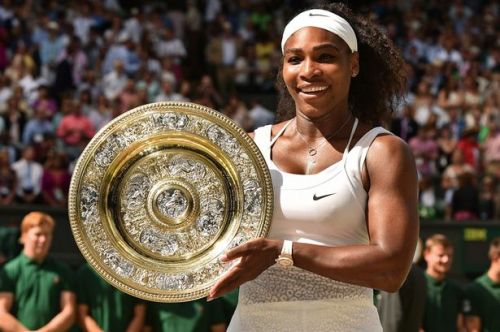 If Serena does fall by the wayside, who are the main candidates for victory? As I so often say, you cannot discount Agnieszka Radwanska from a run at the All England Club and should she benefit from Serena being ousted she would be the most experienced player left in that half of the draw. Of course, Radwanska’s career has been ruined by a niggling lack of bottle when the going gets tough so I wouldn’t make her outright favourite at any stage. Gaby Muguruza is aiming to win back-to-back majors but may find the quick turnaround a little bit too tough emotionally and I wouldn’t be surprised if she too goes out in the first week.

Sabine Lisicki may be unseeded but, as a former finalist here, she can never be ruled out. Her form has been less than desirable for over nine months now but she always brings her best form to South West London. The same applies to Petra Kvitova, the two-time former champ. Can she bring her A game to Wimbledon 2016? Nothing coming in suggests that it is likely and she is going to come up against a dangerous floater in Barbora Strycova as early as the third round so I’d be amazed if she were to complete a hat-trick of titles.

It is Madison Keys who I believe stands the strongest outside bet going into this year’s championships. Her game is improving solidly; she has been to a Major semi-final at last year’s Australian Open and is fresh from a grass court title in Brimingham last two weeks ago. Were she to have to go through Serena Williams in the final, I would make her the underdog and not back against Serena. But should Serena not make it, I expect the Stars and Stripes to still be flying, this time for a new champion in Madison Keys. 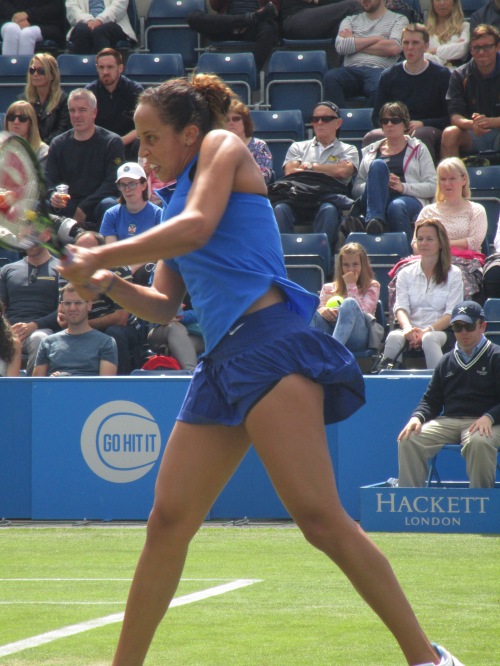 Madison Keys is in fine form

In the men’s tournament, there is simply nothing that will scare Novak Djokovic. He must recognise that he is head and shoulders above everybody in the game right now. If he plays to his maximum ability and intensity he will walk away from here just seven match wins away from the Grand Slam, all four majors in the same calendar year. He could face a small test in the Last 16 in the shape of Philipp Kohlschreiber who has caused him trouble in the past but there is nothing to indicate the German could take out the 2016 Djokovic over five sets. After that, Milos Raonic would need to play the match of his life to take out a warmed-up Djokovic and it is just unlikely to happen.

Everything points to a second Wimbledon final between the World number one and Britain’s number one Andy Murray. Murray won their previous final encounter, in straight sets back in 2013 but only the most patriotic Brit or foolhardy gambler would back him to achieve such a convincing victory this time around. Does Murray have a shot? Yes. He has a very favourable draw and I can see him losing no more than two sets on his way to another home Grand Slam final appearance. But he would need to be absolutely on it and hope Djokovic is not at the top of his game for him to take home the title. Having Ivan Lendl back in his camp will be important to him and there was always a sense that these two special characters would end up back together; they’re almost meant to be. But it looks like a third runners-up trophy of the year for the Scot.

On course for the calendar Grand Slam

Away from the top two, expect a decent tournament but nothing more from 7-time champ Roger Federer. His season has been too affected by injury for him to string anything more than five matches together at his spiritual home. The Swiss legend should content himself with a quarter-final berth. Of the “next generation”, I’d pick Dominic Thiem to once again go the deepest but a place in the last 16 will probably be the best he can hope for here, which doesn’t quite stand up to his semi-final result in Paris. That said, it would represent real consolidation of an excellent spring for the talented young Austrian. The pack is assembling under Djokovic but there is some way to go before they start snapping at his heels.

Brit watch: Murray to reach final, no other player to reach the second week.

I had the opportunity to spend a day at the Aegon Classic in Birmingham on Friday, the first time I’ve ever attended a Wimbledon warm-up event. I had such a good time that I’ve booked up for next year already! Here’s a brief synopsis of my nine hours in Edgbaston. 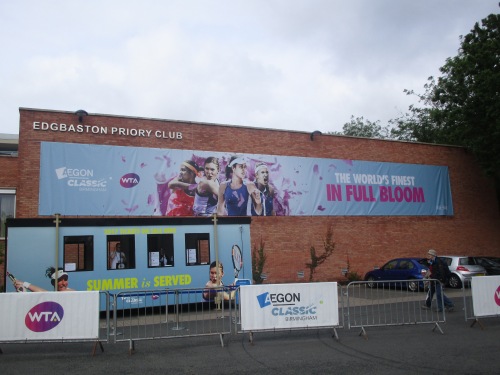 This is such a good event; granted I was fortunate to be on the good side of bad weather for a change; rain delays throughout the week had meant a backlog of matches to be caught up on Friday. There were plenty of top names in action; defending champion Angelique Kerber had to perform double jeopardy on Friday by playing both her second round and quarter-finals matches. She was not alone; Carla Suarez-Navarro, Yanina Wickmayer, CoCo Vandeweghe and Barbora Strycova all had to complete the same task. The event centres on the impressive Ann Jones Centre Court but the other secondary courts are so quaint it is impossible not to adore the tranquillity of them.

The club is walking distance from Birmingham city centre and is in a beautiful part of the second city. As well as this, and crucially, it is competitively-priced; £40 for what would have ostensibly been four quarter finals is very good value in the current UK sports market. Birmingham is working hard to attract better players and with the calendar now being a lot fairer and allowing an extra week of grass court tennis in the build-up to Wimbledon, this event is surely going to continue to grow. I think that in the next couple of years, you might get more and more of the very top players choosing to come here instead of Eastbourne which immediately precedes SW19; Petra Kvitova, Simona Halep, Agnieszka Radwanska and Kerber had all made the decision to come this year.

Konta struggling in my presence, as per usual

As it happened, of those four headliners only Kerber survived until the Friday. She safely negotiated a three-set victory over Australian Dasha Gavrilova in a fun, feisty match before later succumbing to Carla Suarez-Navarro. I missed the entire latter match bar the last game as I was watching another quarter-final out on Court 1, but the game I did see allowed me to see the Suarez-Navarro backhand in all its beauty – my one regret from my day in Birmingham is that I missed this match. Jo Konta, the British number one fresh from arriving in the top 20, was dismantled by Yanina Wickmayer in a delayed second round match; when the Belgian hits this hard and this accurately it is hard to fathom why she hasn’t achieved more in her career. The reason why she hasn’t achieved was evident a couple of hours later when her shots were clearing the lines rather than hitting them in her straight-sets defeat to CoCo Vandeweghe. Vandeweghe reached the semi-finals of Wimbledon last year and could go deep again if she continues to feel at ease on grass. Just to go back to Jo Konta briefly, I’ve now seen her play in Budapest, New York, Paris and Birmingham and she has lost each time. Barbora Strycova is always one-to-watch on grass, as is former Wimbledon semi-finalist Tsvetana Pironkova and they produced a highly-competitive two-set match out on the same court, with Strycova rightly coming out on top. No seed will want to see either of those in the first two rounds at Wimbledon.

The match I had been really looking forward to seeing was Madison Keys up against teenager Jelena Ostapenko. I’d seen Ostapenko play years ago on the junior circuit at the Astrid Bowl and she looked like one to watch then. She has gone on to win Junior Wimbledon in 2014 before rising into the Top 40 at the time of writing. Put plainly, her star is ascending. Keys has got two years on her in terms of experience and game, and it showed. I often forget that Keys isn’t into her mid-20s such is the maturity she shows on court. Ostapenko matched her every inch of the way in the first set and looked the likely winner when she took it, but Keys figured her game out and found a way to win pretty comfortably in the end. It was no surprise to see her go on and lift her second WTA title earlier this afternoon (the other was on grass in England too), beating Suarez-Navarro and Strycova in the latter stages. She’s been rewarded for her run here by entering the Top 10 for the first time and she is finding the consistency to mean she can stay here.

The day was topped off by a fun doubles match, including two of my favourites Heather Watson and Elina Svitolina on opposite sides in a match that didn’t conclude until 8.25pm. Watson’s team of her and Naomi Broady came out on top – Svitolina’s partner? Jo Konta of course! I really ought to give Konta a break for a while.

Nine hours of tennis, my idea of a good day out. Thanks, Birmingham Classic!