The end of an era 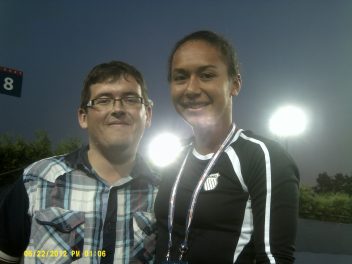 At the time of writing, only one glittering career has officially ended in New York this past week, but at least one more is imminent and two others appear to be nearing their denouement.  Laura Robson has burst onto the major scene by ending Kim Clijsters’ career for good in an incredibly high standard two sets of tennis.  Kim seemed quite relieved to have it all over and done with – I was privileged enough to be in the stands to witness it, and we all wish her the best in the rest of her life – tennis will miss her smile.  The hard-hitting Robson has added movement to her game now and whilst it would be wrong to put too much pressure on her young shoulders, this may not be the last time we see her in the latter stages of a Slam.  She showed all of her best fighting qualities to see off another major winner in the following round when she battled to a 3-set victory over Na Li – an amazing result to follow up on the best win of her career with arguably an even better one.

Elsewhere in the women’s draw, there was serene progress for Serena, Sharapova and Azarenka who have barely dropped a handful of games each.  I saw Serena’s match against Coco Vandeweghe and it was painful to witness – the gulf in class frightening.  The pre-match interview with Vandeweghe suggested that her serve would be better than her opponent’s – I think in reality she served about ten double faults in seven games. Sharapova was equally ruthless in her demolition of Melinda Czink.  I didn’t get a chance to see Vika but her results seem just as emphatic.  Petra Kvitova and Agnieszka Radwanska seemed unseasonably off-colour in their victories over Pauline Parmentier and Carla Suarez-Navarro respectively; it is no surprise to see that they are not featuring in the second week.  The opportunity to check on Angelique Kerber didn’t present itself, but she may have also effectively ended the Grand Slam career of Venus Williams.  if, as I suspect, the sport loses Clijsters and the elder Williams in quick succession, major draws will have an unfamiliar look about the for a while.  Their successes will always be remembered, but time waits for no woman.

And nor does it wait for any man.  Andy Roddick has chosen to follow Kim Clijsters’ example and retire on his own terms.  His announcement that this will be his final tournament is fitting, coming at the place of his only Grand Slam victory, way back in 2003.  History will prove that Andy’s peak came at exactly the wrong time, coinciding with Roger Federer’s dominant years.  If it hadn’t been for Roger, Roddick would be a 3-time Wimbledon champion but Federer always had the American’s number even in the epic 2009 final when A-Rod famously professed that he hadn’t just thrown the kitchen sink at the Swiss maestro, but had thrown “the whole damn kitchen at him”.  Roddick’s respectable showing in New York means he bows out with his head held high.

Lleyton Hewitt’s Last 32 showing proves that the 2-time Slam winner can still live with the best on his best day.  However, the fact that he has had to rely on wildcard entry to all four majors this season certifies that his best days are few and far between these days.  Whilst his fighting spirit will never die, the smart money would be on the former World #1 hanging up his racquet at the end of the 2013 Australian Open.  Again, Hewitt is unfortunate to have played in Federer’s era but he is somebody who fulfilled every bit of potential in his career.  If he is to follow Roddick into retirment, the game will have lost two very popular characters in a short space of time.

As for the contenders, I stick by my tip for the title.  Andy Murray may not have set the world alight in Week One, but the old adage rings true – you can’t win the title in the first week, only lose it.  His run has been tough and he stepped up the level of his play against Milos Raonic in the last 16.  Federer was imperious in the first week, but nobody seemed willing to really get at him.  Murray will do so in the Last 4. I have not seen a single shot of Djokovic’s tournament so far, but results-wise I have seen nothing yet to change my view that it will be the 25-year-old Brit who lifts the trophy aloft on Sunday night, weather permitting of course.

A word on my overall thoughts on the US Open experience.  Firstly, the bad stuff: Arthur Ashe Stadium.  It is is unsustainable at its current size.  From the cheap seats, you are so far away from the action that it is hard to get involved in a contest.  Huge swathes of empty seats greet the day sessions.  The music from Ashe can be heard on all outside courts, which surely does not offer courtesy to the other competitors.  Above all, the USTA’s over-reliance on its so-called marquee names meant that the same players appeared over and over again on the main court during the first week in ridiculously mismatched, uncompetitive encounters. Take Clijsters v Robson and Malisse v Isner out of the equation and the average set score on Ashe in the first five days was 6-2.  Not good value. Onto the good stuff though, and there is plenty.  The most lively Grand Slam I have been to (I haven’t yet been to Melbourne) with ample crowd capacity on all outside courts.  Ticketing is easy, security is quick (although no body scan/search is conducted, which is worrying given tennis’ history), the transport links are excellent and a ground pass represents excellent value  with $72 giving you access to all courts other than Ashe.  A resounding thumbs-up for the US open from me!

The things that make a Slam special though are the things that may mean nothing to the next person – watching my favourite player Nadia Petrova win three on the spin, watching my favourite male player Fabio Fognini win in the long shadows of a Grand Slam sunset and getting my photo taken with one of my faves,  2009 US Open Junior champ Heather Watson, who proved herself to be approachable and pleasant.  All in all, a great week at Flushing!