My Wimbledon 2013 : ground pass goodness and a bit of constructive criticism 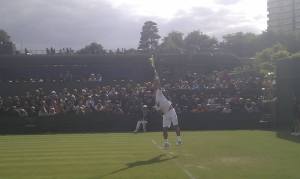 The one thing that instantly struck me about Rafael Nadal’s first round defeat on Monday afternoon wasn’t worry for his old knee problem, nor was it to marvel at Steve Darcis’ accomplishment (after all, it’s becoming old hat to send Rafa tumbling early at SW19 – he may be needing a wildcard shortly with all those ‘deserving’ Brits). No, it was to reassert just how wonderful Roger Federer’s achievement is to have reached 36 (not out…..) consecutive major quarter-finals. Not since the 2004 French Open has he failed to be a part of the Last 8. It is a staggering achievement, and does disservice to how difficult it is to reach the latter stages of a Slam. Witness Rafa’s early exit here or Lleyton Hewitt’s first round defeat as defending champion in 2003. Players raise their level against you and every top player can have an off-day. Except Federer, it would seem. Or so it seemed until late on Wednesday evening when his run finally came to an end. He didn’t play his worst match, but Sergiy Stakhovsky produced a master class of serve and volley, a real return to the past. But whatever, Federer’s record of 36 consecutive Grand Slam quarter-finals will never be matched.

My trip to Wimbledon this year consisted of ground pass tickets on Days 1 and 2. Ground pass is really where the value is on the first few days of a Slam, the potential for well-matched ties all over the grounds. Maybe the quality isn’t so high but you usually see competitive action. But this year, I got lucky and managed to see several really high-quality first round match-ups.

2012 girls’ champion Eugenie Bouchard showed no lack of mental fortitude to battle back against the wily Galina Voskoboeva. Bouchard has the game to be a contender in years to come if she can transfer the potential into development. I was delighted to see her follow that up with a smashing win against former French Open champion Ana Ivanovic, although it has to be said that Ana has never been totally at ease on grass. Fernando Verdasco showed a surprising willingness to come to net and out-volley grass-court specialist Xavier Malisse in four highly enjoyable sets. Truth be told, the one I was most looking forward to disappointed. American Sloane Stephens never looked in any danger against her compatriot Jamie Hampton, and whilst the latter has nice variety to her game, for me it is evident that the Australian Open semi-finalist will go further with her career.

Day Two saw Alexandra Cadantu raise her level to comfortably see off a low-on-confidence-and-form Tamira Paszek, a member of the Wimbledon Last Eight Club. The Austrian needs to take some time to pick apart her game – she has talent, but is slipping away at this stage in her career. The biggest height mismatch came out on Court 10, with 5ft6 Olivier Rochus attempting to slay the 6ft9 Kevin Anderson. I’ve only ever seen the Belgian play three times and each time the opponent has been at least 6ft8. It felt a bit like we were at the circus. The veteran hit more drop-shots in a single match than will probably be produced in total during the remainder of the tournament, but as effective as this tactic was it was ultimately in vain as Anderson’s big serving saw him through in the end. Elena Vesnina negotiated a tricky-looking pairing with big-hitter Andrea Hlavackova, following up her first grass-court title in Eastbourne last week by winning through in two impressive sets. The Russian is a favourite of mine, and in particular my tennis mate who insists we watch her every time we go to Slams. After six long years, the player that he always knew was hidden behind all the errors appears to have finally broken out into a Top 20 player. It’s nice when that happens. The best match of my Wimbledon experience was Dominika Cibulkova against Maria-Elena Camerin. Allow me to explain: Camerin is another of these players you just kind of stumble upon. I think we’ve seen her play five times at Wimbledon, and each time she has been defeated. But this was the closest she has come and against a very good player too. Baseline rallies, crosscourt backhand winners, volleys, lobs, drop-shots; this had it all. What we expected to be a 45 minute destruction job turned into two and a half hours of fab grass-court tennis. Well done to both ladies. And see you next year, Camerin!

A word of warning for the best tournament in the world. If you continue to pride yourself on selling 7,500 tickets each day, you must ensure that they can be sold prior to the start of play. It is not fair that a paying customer who is within the first 7,500 people through the gates misses the first 90 minutes of play. I have been going for the past decade and the whole process is getting slower each year. They have moved the start of play forward, but there is no movement in the start of ticket sales. Two hours to sell 7,500 tickets is a tall order. They have to rethink because the popularity is proving too much for them to handle. I would hasten to add that this four-hour process is not helped by the draconian security search that takes fully ten minutes from the moment you remove your belt. In my two days there, the line was held up as officials scurried to seek the answer to whether it was necessary to take belts off and whether knives and forks were allowed (how difficult is it to know the rules in advance). An airport-style security scan is then performed, and then EVERY bag is searched individually by hand. Yeah, 7,500 bags. After scanning. Too much. I don’t think anybody would accuse the US of being lax with security yet the Open is seamless in getting people through quickly and efficiently. The All England Club will probably argue that security is paramount, yet the scanning is not done with people who enter with debenture tickets etc. Maybe people with more money couldn’t possibly be terrorists, what say you Wimbledon? Either way, it’s shoddy and people who join a queue four hours prior to play (the time the Club recommends) deserve to be accommodated on time. Look out for the players and the corporate customers by all means, but don’t forget the real fans.

Due to that factor, despite the enjoyable matches this time Wimbledon only scores 8/10.